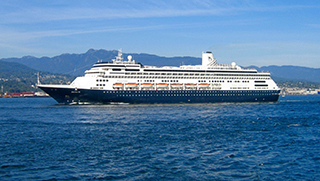 Craig communicated with Cruise Week, reporting on a night-time transit through the Panama Cana.

"The anchor has been lifted; we are transiting the canal tonight. No one is allowed outside; no lights on balconies; no people on balconies...”

Prior to entering the Canal, Zaandam rendezvoused with Rotterdam, transferring hundreds of pax to that ship and taking on supplies

"We were told that about 800 went over to Rotterdam, with the rest staying on Zaandam. We stayed by choice with half of our group on Zaandam...There are numerous people still on Zaandam who are not sick," Craig said.

His comments align with a statement made by Holland America Line President Orlando Ashford yesterday. Ashford emphasized that there is no intention to have a healthy ship and a sick ship to be managed separately.

Craig has traversed the canal before but under far more pleasant circumstances. "It's very different. So far we can see nothing, and we are in a Vista Suite with balcony. I assume that we will sleep through most of it, as there is really nothing to see."

He called the nighttime crossing a surprise: "Likely part of the deal with Panama, to get us through at night," he said.

With many ill passengers and some confirmed COVID-19 victims aboard, it’s still unclear how Craig and the other cruisers – including hundreds of Canadians – will disembark the ship, which is heading for Port Everglades.

"There is still no destination or timeline," Craid said.

For its part, Port Everglades released this statement today regarding Zaandam: "[Following transit of the canal], it would take about three days for the ship to reach South Florida. Holland America must then submit a plan prior to arrival that addresses a long list of Unified Command requirements for entry into a Port."

In other ship news, Princess reports, "Coral Princess is scheduled to arrive in Bridgetown, Barbados the evening of 31MAR. During the short time at the port, extra provisions will be brought onboard to keep all guests comfortable during the onward journey. No guests or crew will be permitted to disembark during this time.

"Coral Princess will continue to proceed directly to Ft. Lauderdale, with an estimated arrival date of 4APR. There remains no known risk of COVID-19 onboard."