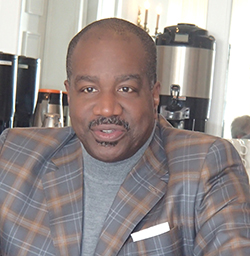 Holland America Line president & CEO Orlando Ashford has written a plea for help as two of its ships – Zaandam and Rotterdam – seek a port where they can disembark both ill and healthy passengers. Hundreds of Canadian citizens are among the guests aboard the ships.

“Holland America Line is working tirelessly to find medical help and safe passage home for the 1,243 guests and 1,247 crew stranded at sea on our two ships, Zaandam and Rotterdam,” Ashford wrote.

“They are among the 9,000-plus passengers still remaining on about a dozen other cruise ships worldwide. These are unfortunate souls unwittingly caught up in the fast-changing health, policy and border restrictions that have rapidly swept the globe.”

Ashford says authorities need to “ensure we continue acting in ways consistent with our common human dignity” to solve the crisis.

“We are dealing with a “not my problem” syndrome. The international community, consistently generous and helpful in the face of human suffering, shut itself off to Zaandam, leaving her to fend for herself.

As a result, Zaandam was forced to take proactive measures, rendezvousing with sister ship Rotterdam to replenish much-needed supplies and protect the health of the guests and crew who aren’t ill.”

Ashford defends the decisions to launch the cruises, saying the impact and spread of COVID-19 was not yet clear, and even medical authorities were warning against travel restrictions.

“It’s important to remember passengers and crew did nothing wrong. When voyages began in early March, South and North America had few confirmed COVID-19 cases. The World Health Organization (WHO) was advising against travel restrictions and the Americas weren’t affected by travel or health advisories. Travel in all forms continued to bustle across the continents as recently as mid-March – albeit with more personal hygiene reminders.

Within a matter of days, that all changed. Local governments swiftly closed ports globally. Ships previously cleared for docking were abruptly turned away. Officials denied repeated requests for access and assistance and the world shut itself off, leaving ships stranded at sea to make it on their own, which isn’t sustainable. Eventually someone must allow these ships in.”

On 13MAY, amid growing global health concerns, Holland America Line announced a 30-day suspension of global cruise operations. Yesterday, that suspension was extended an additional 30 days, cancelling cruises through 14MAY. Ashford says ships like Zaandam, which were already in the middle of a cruise itinerary, were caught up in rapidly unfolding events.

“We quickly sought approval to disembark guests for flights home,” Ashford says. “Chile announced the closure of their borders on 16MAR, literally while Zaandam had been sitting in Punta Arenas for two days awaiting clearance for guests to disembark for flights home. Peru closed, as did Argentina, and the rest of the ports in South America. Repeated requests for humanitarian consideration were denied.

Then March 22 – one day after the voyage’s original end date – a few guests and crew began reporting influenza-like symptoms. Despite countless desperate pleas in the following days, we were forbidden to medevac critically ill patients to shore-side hospitals (usually standard operating procedure for comprehensive care that ships aren’t equipped to provide).”

Since then, four guests have passed away and Ashford says he fears other lives are at risk.

As of 30MAR, 76 guests and 117 crew on Zaandam have influenza-like illness, including eight people who have tested positive for COVID-19. There are also 1,167 healthy guests and 1,130 healthy crew across these two ships, Ashford says.

“We have seen a notable and steady decline in cases of the last 48 hours, which shows the immediate actions we took have helped contain spread.”

Ashford thanked the Panamanian government for allowing the ships to move through the Panama Canal on the evening of 29MAR. Unfortunately, the story doesn’t end there.

“Even with this progress, we are still facing a multi-day journey before we can safely dock and disembark. And we need confirmation from a port that is willing to extend the same compassion and grace that Panama did, and allow us to come in so our guests can go straight to the airport for flights home.”

Ashford says “it’s tempting” to speculate about the illnesses that may have been avoided or lives saved if the ships had been given assistance earlier. But he says the focus now must be on finding a way to safely bring guests and crew home.

“These travellers could have been any one of us or our families – caught up by a fast-changing scenario nobody foresaw. The COVID-19 situation is one of the most urgent tests of our common humanity,” Ashford concluded.

“To slam the door in the face of these people betrays our deepest human values.”