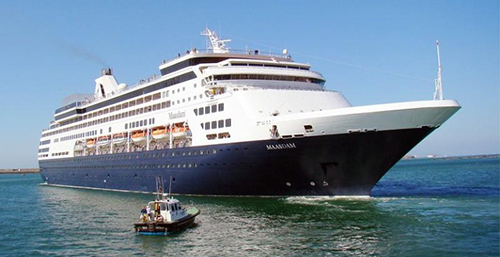 Holland America Line’s Maasdam is one of four ships that will be leaving the fleet.

Holland America Line's Amsterdam, Maasdam, Rotterdam and Veendam will be leaving the fleet.

The ships have been sold in pairs, with the S-Class Maasdam and Veendam transferring to an undisclosed company in AUG 2020, and the R-Class Amsterdam and Rotterdam moving to Fred Olsen Cruise Line in fall 2020.

Holland America Line says it will cancel cruises for the four ships’ deployments, with some select itineraries being assumed by other ships in the fleet.

Guests with bookings on future sailings of these ships will be notified of the cancellations or changes. Along with their travel advisors, guests will be advised if the cruise will operate with a different ship and provided with information and special offers for booking another Holland America Line cruise when operations resume. HAL says guests who prefer a refund will be accommodated.

Cancelled cruises will include:

“It’s always difficult to see any ship leave the fleet, especially those that have a long and storied history with our company,” said Stein Kruse, CEO of Holland America Group and Carnival UK.

“However, Holland America Line has a bright future ahead that includes recent Pinnacle-Class additions, with a third sister ship next year that will continue to maintain our overall capacity in the marketplace.”

Maasdam joined the fleet in 1993 as the second of four S-Class ships. Carrying 1,258 guests, it is the fourth HAL ship to bear the Maasdam name.

Amsterdam joined in 2000 as the final of four R-Class ships. Carrying 1,380 guests, it is the third in the fleet to be named Amsterdam.