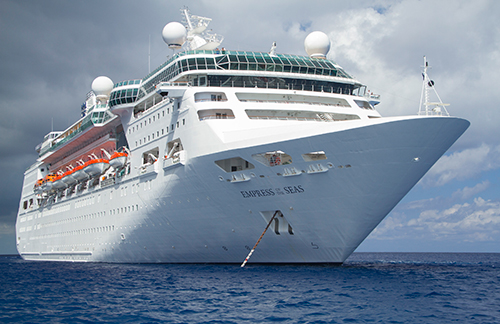 Empress of the Seas (pictured) is one of two ships leaving the Royal Caribbean International fleet,
along with Majesty of the Seas. Photo by Jsausley - Own work, CC BY-SA 4.0.

In a note sent to travel advisors Wednesday morning, Royal Caribbean International has announced that Empress of the Seas and Majesty of the Seas will be leaving the fleet. The ships launched in 1990 and 1992, respectively.

"Their departure from the Royal Caribbean fleet is a major moment in our brand’s history and was a decision that was not made lightly. However, as our fleet evolves, decisions like these pave the way for the introduction of new and reimagined innovative ships," RCI said in the bulletin.

"Through the years, Empress and Majesty have created incredible memories for so many of our guests and crew members. Many of your clients think fondly of these ships, and we know this will be a bittersweet goodbye."

Travel advisors with clients currently booked on future Empress or Majesty sailings will be contacted regarding their options, RCI said.

"Empress was Royal's first ship specifically designed for short three- and four-night itineraries, with her first cruises visiting The Bahamas from Miami. In 2004, Empress became the first cruise ship to sail from Cape Liberty in Bayonne, New Jersey, when we opened our terminal. And in 2017, Empress took the limelight once again as she embarked on Royal Caribbean’s inaugural cruise to Cuba," RCI said.

Majesty was the third ship to round out the Royal's Sovereign Class.

"More than twice the size of the average cruise ship, Majesty was the largest ship in our fleet when she debuted in 1992. Her adventures began with seven-night Western Caribbean cruises departing Miami," said Royal.

RCI noted that crew members impacted by the ships' departure will be transferred to other ships in the fleet.

According to Breaking Travel News, the ships have been sold to an undisclosed party, based in Asia-Pacific, that will release details for future sailings at a later time.