HAL's Orlando Ashford, A Man Of Many Talents 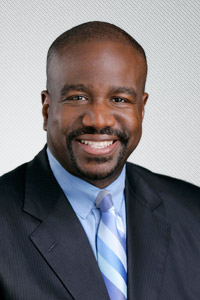 Of all the new presidents & CEOs of cruise brands announced within the past few months, Orlando Ashford is unique in his lack of background in the cruise industry. But the new president of Holland America Line says that this doesn't rattle him, because in-depth knowledge of this business is not why he got named president.

"What I tell people is that I'm not going to come here and 'out-cruise-industry' the folks that are here," Ashford told Cruise Week.

He laughs about his early days on the job in December: "As you can imagine I did a lot of drinking from the fire hose and I'm still drinking from the fire hose. Meetings and meet and greets, sign this and approve this and shake hands and go have breakfast and take a picture. And then okay, we have to fly you to south Florida because you have to jump on a cruise with the Centurions [top agent producers for HAL] and answer a lot more questions that I didn't know the answer to."

Ashford's conclusion: "It was great. I guess I'm getting to an age in life where I know what I know and there's a lot that I don't know and I'm getting more comfortable with both of those camps."

Ashford isn't shy about praising the line he's only just getting to know: "I've inherited a wonderful organization. We just finished celebrating a number of people that have crossed the 25 year threshold with the company, which is great." Society, he says, sometimes makes people feel bad about being in one place for a long period of time. "We should celebrate that. I think that is a competitive advantage that we have a place where people want to do that."

The way he does that is by tapping into the "collective intelligence" of the group. "We've got individuals that are very knowledgeable about the cruise industry. We've got partners, travel agents - a number of whom I met when I was on the Centurion cruise a few weeks ago - and we have our guests." This idea makes sense given Ashford's background is in consulting and human resources. "I've spent my career working with organizations and helping them to figure out how to maximize the impact of their business through people," he explains. Those who find the right people for the job, not those with the latest program that can be copied by the competition in 6 months, will be the winners in today's market, he says.

Part of the reason Ashford feels confident that he will be able to thrive at HAL is that this isn't the 1st time he's been thrown into the deep end, so to speak. He once was asked to head Coca-Cola's Eurasia and Africa human resources department in Istanbul. “Now, how do you take an American HR person, pop them into Turkey, and ask them to run human resources for 90 different countries?" His answer is illustrative of how one can expect him to proceed in the cruise business. "Well the key to that is I managed around outcomes and not process. There's no way I could know every local labour law or cultural nuance or thing relevant to all the different things that go on in each country from a different perspective."

So he did what he could: "What I could do is paint a picture for the type of culture, for the type of environment, the type of expectations that we want to set for the employee experience for that organization at that time and then ask the local teams what is it that we need to do to make this real in this country."

He brings that philosophy to the travel industry. "So whether it's planning internally, talking to guests, talking to travel agents, the goal is to create true partnerships. "We need to make money, we need to deliver value for our guests, we need to create opportunity for our partners to participate financially and personally as well. It doesn't work if everybody doesn't win."

That, says Ashford, was how he approached the Centurion meeting. "Being a person with a very different background, a lot of the folks on the ship were really curious. So I did a kind of impromptu consulting talk on the last day about my book Talentism, and human capital and things that maybe travel agents could take back with them as they think about talent and talent management in their organizations."

The reception was positive. "In fact, a couple of them have asked me to speak to their management teams in the future. So we're going to bring this whole talent agenda to the cruise industry."