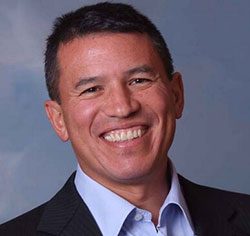 Stuart has been with Norwegian Cruise Line since 1988 and has held a number of leadership positions, most recently as Executive Vice President of Sales.

“Given the recent restructuring of the role and job responsibilities, Drew has decided to step down. We thank him for his contributions and wish him well,” said Frank Del Rio, President & Chief Executive Officer of Norwegian Cruise Line Holdings Ltd. “As we continue to build the newly merged organization, we are tapping into the tremendous company and industry knowledge that Andy has, along with the strong relationships he has built with our travel partners.”

Del Rio says Stuart was an easy choice. “Andy and Norwegian are virtually synonymous. He is very well known and respected by our guests, travel partners, officers, crew and team members. I am extremely confident that he is the perfect leader for the next phase of Norwegian’s growth.”

Stuart has played a significant role in building the Norwegian brand, particularly in the roll out and marketing of the line’s signature Freestyle Cruising. Del Rio also credits Stuart for forging “greatly strengthened” relationships with travel partners with the introduction of Partners First, the company’s corporate philosophy of always putting its travel partners 1st.

During his 27 yr. tenure with the company, he has held responsibility for a number of key areas including: Global Sales, Passenger Services, Revenue Management, Marketing and Public Relations. He also served as Chief Product Officer, responsible for delivery of the Freestyle Cruising product across the Norwegian fleet.

“Having seen Norwegian Cruise Line grow significantly during the course of my career, I am thrilled and proud to lead this incredible company as we continue to enhance and build the brand,” said Stuart. “The future is extremely bright and I am looking forward to continuing to work with our travel partners through our expanded sales team, delivering an exceptional product to our guests in conjunction with our hard-working officers and crew and ensuring that our team members are motivated and engaged, all the while building value for our shareholders.”