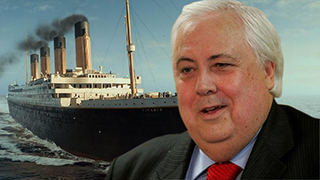 The Titanic II is now scheduled to make a two-week maiden voyage in 2022, and construction of the replica recently resumed after a financial dispute  held up the US$500 million project for several years.

The ship, which will feature the same cabin layout as the original, will sail from Dubai to Southampton, England and then on to New York, tracing the North Atlantic route of its doomed namesake, which sunk on 12APR, 1912, less than three hours after sideswiping an iceberg.

The new ship will carry almost exactly the same number of passengers (2,400) and crew (900) as the original, but more importantly, it will boast modern navigation and safety technology – including plenty of lifeboats.

After its maiden voyage, the Titanic II will embark on other global routes. The replica is being built in China rather than the original shipyard in Belfast, Northern Ireland.

“The ship will follow the original journey, carrying passengers from Southampton to New York," said Blue Line chairman and Australian entrepreneur Clive Palmer, "but she will also circumnavigate the globe, inspiring and enchanting people while attracting unrivaled attention, intrigue and mystery in every port she visits.”

And she will no doubt inspire a number of "I'm king of the world" Instagram moments on her bow.