'Boring' Nebraska Gets Tourism Attention By Mocking Itself 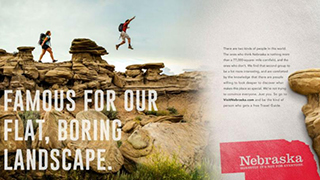 Honesty in advertising? It seems to be working for Nebraska.

A new self-deprecating marketing pitch has been making waves since being unveiled last week and earned wide exposure -- something it has struggled to do in previous campaigns.

The new slogan? "Nebraska. Honestly, it's not for everyone."

Nebraska consistently ranks near the bottom of states most tourists plan to visit. So the Nebraska Tourism Commission decided to roll the dice by laughing at itself.

"To make people listen, you have to hook them somehow. We had to shake people up," State tourism director John Ricks told the Omaha World-Herald.

The new campaign is accompanied by equally quirky video ads. In one, a voiceover states: "Nebraska is kind of like that odd kid. Didn't say much in school. Slightly peculiar maybe. But when you took the time to get to know him, turned out he was pretty interesting."

In another it describes itself as 'famous for our flat, boring landscape.'

The unconventional campaign has so far had the desired effect. It has been covered on major TV networks and scored feature articles in the likes of The Washington Post.

Late-night host Stephen Colbert also got in on the act with a humorous skit, teasing the state:   "Nebraska, are you OK? Seriously, it seems like you could use a vacation to 'Not Nebraska.' "

Colbert also offered sage advice for other states looking to outdo Nebraska with these self-mocking mottos:

"South Dakota: When North Dakota's full," "Delaware: Are we even a place?" and "New Jersey: Look, we're not happy about it either."