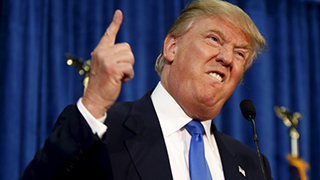 Not the best role model.

You could see this one coming.

A Florida man is accused of groping a female passenger while on a flight from Houston to Albuquerque and later telling authorities that the president of the United States “says it's OK to grab women by their private parts.”

Bruce Michael Alexander, 49, was arrested Sunday and charged with abusive sexual contact after a woman on a flight from Houston accused him of touching her "around her bra line" and elsewhere, according to a criminal complaint.

The woman said she had fallen asleep on the flight and woke up to the passenger behind her grabbing "the right part of her right breast," the complaint said.

She assumed it was an accident, but about a half hour later she "felt fingers slowly grab the back of her arm, squeezing above the elbow then slowly and 'attentively' grab her right side, again around her ribs and bra line," according to the complaint.

That's when she confronted the man behind her. She asked him why he thought it was all right to touch her like that, and asked a flight attendant to help her change seats.

Alexander was detained when the plane landed in Albuquerque. His fingers matched the description the woman gave to authorities as thick and hairy with dirty fingernails.

Alexander recalled in a written statement only that the woman in front of him had spoken to him and then changed seats.

He remains in custody pending a preliminary hearing and a detention hearing.