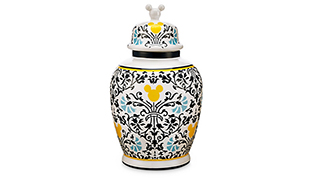 Maybe a Disney urn is a better idea.

Disney theme parks attract people celebrating engagements, birthdays and even weddings, but employees have revealed that the ‘Happiest Place on Earth’ is also popular for something else.

Custodians at Disneyland in Anaheim, California, and Walt Disney World in Orlando, Florida, claim the famous parks are a preferred place for guests to scatter their loved ones' ashes, according to the Wall Street Journal.

In fact, the outlet reports it's so popular that the occasion warrants its own code: HEPA cleanup.

The special code, which refers to the use of an ultrafine vacuum cleaner, is used at least once a month, custodians told the Journal.

Guests reportedly sneak in their family members' ashes in plastic bags or pill bottles hidden inside purses or backpacks. Once inside, visitors spread them throughout landscaping in the park, flower beds and water rides, including Pirates of the Caribbean and It's a Small World.

As for the Haunted Mansion? It appears to be the most popular place where families leave their loved ones.

“The Haunted Mansion probably has so much human ashes in it that it’s not even funny,” one Disneyland custodian said.

When it happens, employees reportedly tell guests the ride is temporarily closed due to "technical difficulties."

Missouri native Shanin Himebrook, 41, told the outlet that she laid her father to rest near Disney World's gates earlier this year to memorialize their summer trips together.

"He wasn't my tired, graveyard-shift Dad (at Disney World)," she said. "He was, 'Let's get you the Mouse ears! Let's get your name stitched in it!' It's like, 'I love this dad! Can we stay forever?'"

A spokesperson told the Journal that "this type of behaviour is strictly prohibited and unlawful" and any guest caught in the act will be "escorted off property."