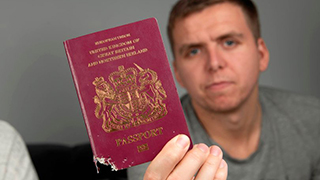 My dog ate my passport. No, really.

Newlyweds Daniel and Tia Farthing told The Mirror their honeymoon was ruined when they were denied entry into Bali because their dog had chewed off the corner of Daniel's passport.

The couple, from Suffolk in the UK, told the British newspaper they flew 16 hours to the Indonesian island before an official told them the travel document was unacceptable and sent them back home.

"We got married last year and planned our honeymoon for our first anniversary," Tia told the newspaper. "We’d booked an elephant safari, a villa and pool. It was going to be so special.”

On the way home, the couple says Daniel, 26, was detained in Singapore for seven hours, where he was locked in a room with about 30 others. "I was shaking and throwing up. It was a horrendous experience," Daniel said.

After dishing out 4,000 pounds (or about $5,000) for their dream honeymoon, the couple's family helped set up a GoFundMe page to help cover lost expenses.

"They both were unable to go on their honeymoon of a lifetime, one which they have spent a whole year saving for and as you can imagine, Bali is not a cheap holiday," Tia's sister wrote on the fundraising page. "And the worst part is the insurance won’t pay out a single penny, so they have lost thousands of pounds."

The couple's dog, a 4-year-old Labrador-Collie mix named Milo, actually got hold of Daniel's passport years prior when he was just a puppy.

Daniel had successfully used the passport around Europe, and he said UK Border Force agents had assured him it would be fine for travelling to Bali.