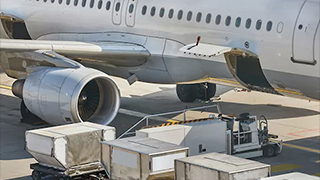 A late night of boozing has landed an airline employee in hot water.

A Piedmont Airlines worker in Kansas City apparently dozed off while in the cargo hold of a Boeing 737 jet and woke up in Chicago. Luckily for him, the hold was pressurized and heated and the employee didn't require medical attention.

ABC News reports he said he was suffering a hangover after a late night of drinking.

"A Piedmont Airlines employee, who was working an American Airlines flight at Kansas City International Airport inadvertently fell asleep in the forward cargo hold of a Boeing 737-800 aircraft. He did not request any medical attention upon arrival in Chicago, and we are grateful that he did not sustain any injuries," American said in a statement.

"The American team is very concerned about this serious situation, and we are reviewing what transpired with our Piedmont and Kansas City colleagues."

The employee has been suspended pending an investigation.

He was detained at Chicago O'Hare and questioned but no charges were filed by the FBI or Chicago police.