JAL Pilot Admits Being 10X Over The Legal Alcohol Limit 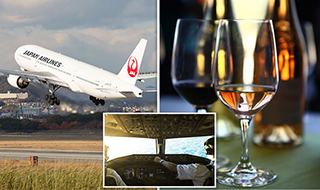 The night before he was scheduled to fly a 244-seater Boeing 777 aircraft, a Japan Airlines pilot consumed two bottles of wine and a pitcher of beer. Thirsty work that.

Not surprisingly, he was still drunk in the morning – if fact, he failed a breath test shortly before he was due to fly from LHR to Tokyo – and failed it spectacularly.

Katsutoshi Jitsukawa, 42, had almost 10 times the legal permitted amount of alcohol in his bloodstream when he was arrested, the Metropolitan Police said.

At Uxbridge Magistrates' Court this week, the pilot pleaded guilty to being over the alcohol limit.

Flight JL44 was due to take off just 50 minutes after tests showed that First Officer Jitsukawa had 189 mg of alcohol per 100 ml of blood in his body. The legal limit for pilots is 20 mg, while drivers in England, Wales and Northern Ireland are allowed as much as 80 mg. But by any measure, 189 is drunk, very drunk.

He was caught after the driver of a crew bus smelled alcohol and called the police, according to Japanese broadcaster NHK.

Jitsukawa was remanded in custody and is due to be sentenced November 29 at Isleworth Crown Court.

The flight was eventually operated by the two remaining pilots and departed after more than an hour's delay.