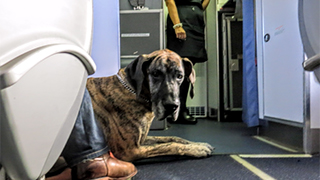 Sample service dog, not the pooper.

A Michigan man is disgusted after an incident on a Delta Air Lines flight involving a service dog and the mess it left behind.

Matthew Meehan said he had just boarded the plane to Miami when he noticed feces all over the floor and his seat. When he alerted the crew, he said they did little to nothing to help.

"Actual feces, and it was all over me. I sat in it and it was on the seat, on the floor, the seat in front. And I was literally in it," Meehan said.

The Bay City resident spoke with TV5 via FaceTime about the smelly encounter he had on a recent flight from Atlanta to Miami.

He said upon sitting in his seat, he and the passenger next to him quickly discovered they had sat in feces. They both ran to the front of the plane to clean off and were shocked by what the flight attendant handed them.

"I have no idea why I wasn't offered something from the bio hazard kit to clean myself up with. Instead, I was handed two paper towels and one of those miniature bottles of Bombay Sapphire, a bottle of gin to clean myself with," Meehan said.

Meehan said that was just the beginning. After cleaning what he could of the feces from his hands and clothing, he said flight attendants continued to board the plane and told him there was nothing more they could do. He exited the plane to speak with a manager and said this was her response:

"At the very beginning, she sighed, 'What's your problem?' And it was just, you know, I had to step back for a moment and say, alright, keep your composure. You do not want to be one of these people you see on the news getting kicked off a plane. Meanwhile, I'm covered in feces," Meehan said.

Meehan said he and fellow passengers were forced to lay a blanket over the mess and endure the smell for the entire two-hour flight.

"On Nov. 1, an aircraft operating flight 1949 from Atlanta to Miami was boarded before cleaning was completed following an incident from a previous flight with an ill service animal. Delta apologizes to customers impacted by the incident and has reached out to make it right, offering a refund and additional compensation. The safety and health of our customers and employees is our top priority, and we are conducting a full investigation while following up with the right teams to prevent this from happening again. Upon landing in Miami, the aircraft was taken out of service to be deep cleaned and disinfected."

Meehan acknowledged he was offered a refund, but more importantly, he hopes this incident forces Delta to look at its current policies.

Meehan also said he has been contacted by dozens of lawyers since the incident, wanting to take on the case.