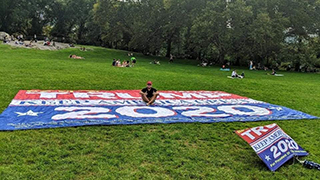 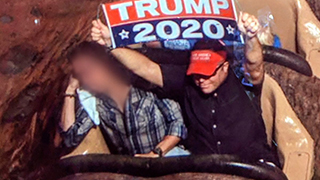 It’s a place people go to escape the their troubles and concerns. But for one Disney World visitor, it was also the perfect place to do some ‘guerrilla marketing’ on behalf of President Trump.

It started in September when Dion Cini, hung a massive “Trump 2020” banner outside Disney’s Main Street Railroad Station. Cini claims he was banned from Disney but later told he could return if he agreed not to incite a crowd.

Last week he displayed a "Trump 2020" sign on Splash Mountain and a "Keep America Great" sign on Expedition Everest. Now he is banned again.

Cini told WFTV that while he wanted to abide by the rules, he wanted to "test them" to see whether it had something to do with unfurling a flag or what was written on it.

A Disney spokesperson says it's not about the content or a political issue, but the "result of repeatedly not following park rules."

“Banned for life from Walt Disney World for the 2nd time in a month,” Cini wrote on Facebook. “They hate my signs, or the President? Maybe both?”

For Cini, there’s no question where his loyalty lies. He says he believes that Trump is “doing a better job than any president I’ve ever seen.”