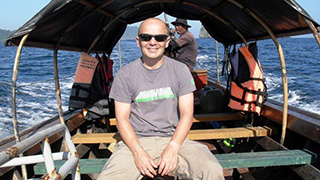 Crushed by an elk.

A businessman is suing British Airways for $17,000 claiming that sitting next to a 320-pound passenger injured his back.

Freelance civil engineer Stephen Prosser, 51, claims he suffered soft tissue damage after the passenger “wedged” himself into the seat next to him.

Prosser, who is 5’ 2” and 140 pounds, claims the passenger was “so large” his body fat “spilled” into his seat by several inches.

The claimant said he was crushed against the side of the plane. His lawyers say Prosser was “forced to adjust his body and sit in an awkward and uncomfortable position” for the whole flight. (Sounds like a normal flight to us!)

Dad-of-two Prosser said: “I’d paid over £1,000 for the flight and usually I fly Thai Airways but because BA had a sale on and were cheaper I went with them.

“Just as the plane door was about to close, this 6’ 5” elk (elk?), weighing about 23-stone got on-board and sat between myself and another passenger who had the aisle seat.

“He was a huge bloke, not just overweight but really big boned as well. He was a real lump.

“I felt discomfort as soon as he sat down because I was pinned against the side of the cabin. I ended up doing a lot of damage to my back over the course of a nightmare 13-hours.”

Prosser says he was left suffering from his injuries for the next three months.

BA denies the claims, stating Prosser “did not display any signs of injury” when leaving the flight. They also disagree that his seatmate was fat. A BA customer service manager said the passenger next to Prosser was “well built and over six feet tall, but certainly not fat.”

Those familiar with British slang might find it amusing that Prosser rhymes with tosser.