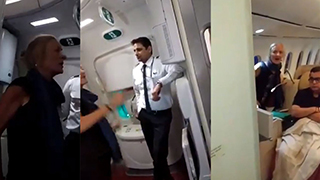 Don’t know about you, but we here at Deviations get a little tired of drunk people on planes. It’s just not that funny. Never was.

But we’re making an exception today, for a 50-year-old woman passenger who was so drunk that she thought screaming her status as an “international lawyer” would win her sympathy – and more wine.

The carrier was Air India and the incident happened on a recent flight from Mumbai to LHR. The woman was arrested on landing.

After cabin crew refused to give her more alcohol, having decided she was already intoxicated, the woman demanded to speak to the pilot.

“I am a f**king international lawyer. I work for all of you f**king people… the f**king people of Asia,” she can be heard shouting at cabin crew. Oh, the humanity!

Footage of the incident is online with the foul language beeped out.

London Metropolitan Police said the unnamed woman was arrested and taken into custody when the flight landed at London Heathrow Airport.

The Daily Mail online has reported the woman is a Northern Irish human rights lawyer who was on her way home from a two-month break in Goa.

The woman allegedly demanded a letter from the pilot saying that the stewards were acting within the rules in refusing to serve her.

She was escorted off the plane by three armed police officers when it landed at Heathrow four hours later.

The Mail quoted London police saying a woman was arrested on suspicion of racially aggravated public order, common assault and drunk and disorderly and taken to a west London police station.

“She was subsequently released under investigation.”