Russian Plane Runs Over Man On Tarmac, Takes Off Anyway 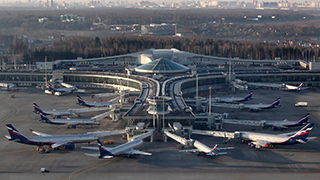 Buckle up – this is a weird one.

When a passenger aircraft heading for takeoff at Moscow’s Sheremetyevo Airport on Tuesday ran over and killed a man -- apparently a passenger – the flight took off for Athens regardless. Now, questions are being asked.

“When the passenger plane bound for Athens was taxiing onto the runway, the crew reported a collision with an unidentified object,” she said. “A human body was found, with clothes and personal belongings scattered around.”

The corpse has since been identified, Zakharenkova said, and police have been informed about the incident. The man “died instantly,” she added.

The airport did not name the victim nor give any information about whether he was an airport employee or a passenger – but Russia’s Sputnik news outlet was more forthcoming, saying the plane involved was a Boeing 737 and giving other clues.

Russian media is reporting that the man’s boarding pass was among the “personal belongings” scattered around the site of impact – indicating the deceased was a passenger. If so, what the heck was he doing on the taxiway?

Perhaps most alarmingly, Sputnik reported: “However, the crew decided to continue the flight, as the emergency equipment on the plane did not go off.”

The identity of the airline remains a mystery. FlightAware.com sheds some light on it, indicating that the route from Moscow Sheremetyevo airport to Athens is flown nonstop by Russian carrier Aeroflot. That seems to be the only airline that does the route direct nonstop.

The Boeing 737-800 used by Aeroflot has a maximum takeoff weight of 79 tonnes. That’s gonna leave a mark.

Hanna - November 22, 2018 @ 11:23
I read that he was an Armenian deportee from Spain. I guess he was trying to flee his security guards that were bringing him to a plane.