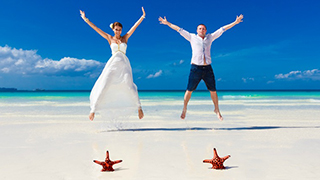 Making the rounds this past week was a tale of not one but two bridal groups, who, until a couple of days prior to scheduled departure, were uncertain if they would make it to their destination wedding.

In both cases, the knot-tying trip of a lifetime was booked through a wedding planner in Vancouver, whose website promised the world.

Deposits were made, final payments submitted by wedding-goers, but in the days leading up to the event, a slight glitch was noted by the two groups – they had received no travel documents, paper or virtual.

In the absence of same, understandably anxious folks began reaching out to the wedding planner as to the whereabouts of these somewhat crucial components.

"I don't know," came the response, "I paid XYZ Travel which in turn was to have paid the tour operator."

Mainstream media got wind of the issues and contacted XYZ. The response: "We haven't worked with this planner in months."

Reaching out to the tour operator, media was advised: "We received minimal deposits months ago but nothing since."

There is a happy ending: for the couples in question -- group finals for all passengers seem to have gotten paid hours after the stories hit the fan and each bride will now be able to say "I do" through the tear-stained veils of their respective wedding outfits.

In each case, the 'should have been happy' couples booked the most important trip of their lifetime with an outfit located a thousand miles from where they resided.

But the reviews on their website looked so good! Sadly, reviews for Enron were spectacular until days before its historic collapse.

In doing a little digging of my own, the reviews about said planner were amongst the most damning I'd seen in years, going back to 2016.

Additionally, the planner "appeared" to be operating four different businesses in addition to a holding a part-time career as a singer despite claiming on social media that she'd been in  the travel business for years.

Further digging produced credibility gaps -- all the legitimate travel organizations she "claimed" to have been attached to denied any affiliation with the individual.

To say we're overjoyed that all's well that ends well is an understatement.

Going forward, however, I suspect authorities are going to dig a little deeper into some disturbing elements of this situation – like where the money taken by what may or may not have been a duly licensed travel agent wound up.

Personally I've always made it a practice to do business with someone I can reach out and strangle if things go south.

Yes, I'll order the odd $25 item on-line from happygifts2me.com but when it gets into the $40-$50,000 arena -- I want face-to face-with an industry recognized, certified outfit.

Spider webs are intriguing to say the least -- but getting caught up in them has over the years taken its toll on more than a few well-meaning but unsuspecting victims.

debbie marcotte - November 27, 2018 @ 16:48
Sorry I do not feel sorry for them ...it should be with an agent and done with the approriate well know company for the rest