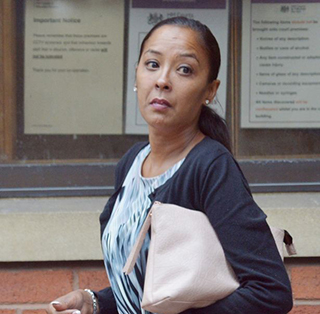 The Deviation Department at Open Jaw gets a little tired of drunks-on-a-plane stories. There are just so many, and they’re not funny.

But once in a while someone gets so egregiously bladdered in the air that it is worth noting.

Kiran Jagdev, 41, took advantage of a three-hour delay for a Jet2 flight to England from Tenerife by drinking eight cans of beer.

Once on the flight, she was refused more alcohol by the cabin crew, who accurately surmised that she was already hammered. They should have taken the opportunity to give her the boot, but they didn’t.

Frustrated in her search for more booze from the flight attendants, Jagdev did the next worst thing – she sucked back two bottles of rose that she had purchased at duty-free.

Not surprisingly, things went downhill from there.

She erupted into a variety of drunken antics, including shouting, crying, swearing and repeatedly kicking the seat in front of her – causing the passenger sitting there to suffer a seizure – yes, you read that right.

Later in the flight, high winds gave the flight crew problems on approaching East Midlands Airport  to land. Jagdev decided to liven up the atmosphere aboard by yelling “We are all going to die!” for 10 minutes as the plane circled.

A judge jailed Jagdev for six months for her drunken behaviour, saying he was imposing a deterrent sentence to demonstrate “there are consequences” to getting drunk on planes.

During sentencing, Judge Philip Head said: “The effect on other passengers must have been dreadful. You are the author of your own and other people’s misfortunes.”

The case will provide ammunition for British airlines and others pressing for tighter alcohol restrictions at airports. As for Jagdev, she has six months in which to reflect on her behaviour.