‘Belsnickeling:’ The Nova Scotia Christmas Tradition No One Has Heard Of 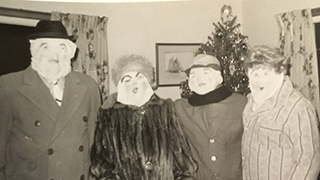 It’s real: a CBC listener sent in this photo to prove that Nova Scotia belsnickeling was/is a real thing. From left to right, Paul and Evelyn Ritcey and two of their friends dressed up for Belsnickeling in Riverport, N.S., in 1976. (Submitted by Anna Ritcey )

Porter Airlines bemused social media users in Nova Scotia recently with an article in its in-flight magazine that described something called ‘belsnickeling’ as a popular holiday tradition in the province.

It sounds like something the Whos might do in Whoville in the Dr. Seuss classic ‘The Grinch Who Stole Christmas.’ But according to many Nova Scotians, they don’t know from belsnickeling.

The Porter article claimed belsnickeling was introduced by German immigrants in the 1750s, and involves people going to neighbours’ houses in Santa costumes, jangling chains and bells. Cake and hot drinks are also involved.

But the idea was met with surprise and some mockery from many Nova Scotians who said they’d never heard of it – even as a few lonely voices suggested it was a real thing, or at least used to be, in certain parts of the province.

“Could the Nova Scotian who fed this hilarious lie to Porter please show yourself,” one Twitter user wrote in a post that got about 850 likes.

Porter says it understands the tradition may not be common across all of Nova Scotia, but has ties to Lunenburg and the wider South Shore.

“We felt it was an interesting bit of history to share with our readers,” PD spokesman Brad Cicero said in a statement.

“We’re glad we were able to bring more attention to this provincial lore, and maybe with all of the online interest, belsnickeling will become a wider spread holiday tradition in the years to come?”

The tradition does have strong presence elsewhere, including in Halifax, Pennsylvania, which will host the 16th annual “Belsnickel/Christmas Parade” on 1DEC.