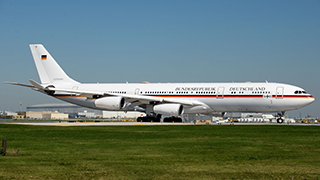 It seems that not only the great unwashed are subject to flight cancellations and re-routings.

Germany's Chancellor Angela Merkel, in giddy anticipation of her scheduled Buenos Aires dinner date with The Donald, boarded German Air Force One in Berlin on Thursday and after stowing her duty free in the overhead, settled back to enjoy a schnapps or two.

Nonetheless, GAF ONE lifted off from Berlin without incident, but a scant 60 minutes later the captain summoned his VIP to the inner sanctum.

It seems more than a few of the electrical systems on the Airbus A-340 were in siesta mode and continuation of the flight was somewhat ill-advised.

To make matters worse, the available runway at the diversion airport in Bonn was more suited to a Cessna than an A340.

The skilled flight crew managed to set big bird down on the runway but not without assistance from the Bonn fire brigade who spent a little time hosing down the aircraft's brakes which had overheated during the rather short field landing.

Knowing that her dinner date wasn't the most patient guy at the G-20 Summit, good old German ingenuity pulled a substitute aircraft out of the hat.

And had they managed to be able to find a crew with enough available duty hours to fly it, they'd have been fine.

Visions of Ms. Merkel scouring the net for the next flight to Argentina come to mind as hours later she was en route to Madrid to connect with a scheduled Iberia flight to Buenos Aires.

But just when you think "you can't make this stuff up" -- there's more!

That very same aircraft was unable to head home in October from Indonesia with Germany's Finance Minister on board due to rodents having chewed through electrical cables. And just last month, German President Frank Stenmeier had a South Africa conference twisted around due to that very same aircraft's engines failing to start.

ACHTUNG! Boeing on the next go-around perhaps?

But back to Angie - all's well that ends well with her staff having managed to secure a last minute seat sale in Iberia's economy cabin.

No free schnapps on that flight, however with all the money saved with not having to fly GAF ONE across the Atlantic -- I'm sure she was able to avail herself of a few from the buy-onboard cart.

And on the bright side?

Dinner with Donald was off the table. It’s almost like it was planned that way.