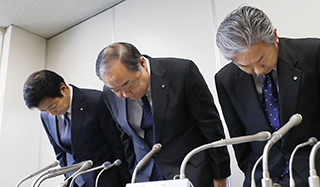 JAL execs bow in apology at a press conference in Tokyo.

The president of Japan Airlines has paid the price for the drunken antics of a JAL pilot.

Yuji Akasaka will take a pay cut for the next three months as penance for the 'embarrassing' incident which saw the pilot jailed for 10 months after turning up for work at London Heathrow with nearly ten times the allowed level of alcohol in his blood.

Akasaka will take home 20% less in monthly pay until February. In addition senior managing executive Toshinori Shin will have his pay docked by 10%. Both had already volunteered to take pay cuts in November.

It’s a fascinating aspect of Japan’s culture that senior officials are duty-bound to take responsibility for the actions of those under their command.

Pilot Katsutoshi Jitsukawa was found to be staggeringly over the limit when reporting for duty for a Tokyo bound flight in October. The flight was delayed for more than one hour, but that sure beats the potential consequences of flying with a drunk pilot. He was sentenced in an English court to 10 months in prison. The judge said the pilot posed “a catastrophic risk” to passenger safety.

JAL has promised to “establish an effective and strict management policy to achieve full compliance at all levels to prevent a recurrence.”

Meanwhile, authorities are mulling stricter rules for Japan's airlines in the wake of this and other similar incidents in recent months.