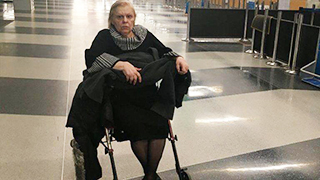 In the media’s eagerness to slam airlines for every mistake they make, sometimes mistakes are made. It certainly doesn’t help when people lie about their situation, in hope of either attention or undeserved compensation. Here’s a recent example.

Information released by American Airlines contradicts a family's claims that their 67-year-old mother was left stranded in her wheelchair Friday for hours at O'Hare International Airport after her flight was cancelled.

The Washington Post reports that Olimpia Warsaw was scheduled to leave last Friday on an AA flight from Chicago to Detroit after attending her ex-husband's funeral. Her son Claude Coltea told CBS Chicago that he escorted his mother to her gate and checked to see that the flight was leaving as scheduled before leaving to catch his own flight home.

Warsaw's flight was cancelled and she was offered a hotel room for the night for a flight the next morning. A porter was assigned to take care of her. But Coltea told the television station that the porter told Warsaw that his shift was over and he could not take her to the hotel, and left her. His mother, he said, was unable to communicate clearly and could not find anyone else to help get to the hotel.

The family claimed they did not know Warsaw had been stranded until she failed to arrived in Detroit as scheduled. It was then that they contacted American Airlines.

The family told the station the airline couldn't find Warsaw, who was found several hours later by O'Hare security officers.

But a timeline released by the airline shows that a representative from the contractor assigned to take care of Warsaw spoke with Coltea at least twice.

Airline officials said records show that Coltea rebooked his mother on a flight leaving Saturday afternoon and that he said he would send someone to pick her up at the airport.

"We launched an investigation with our Chicago team and the vendor we utilize that provides wheelchair services at O'Hare," American said in an emailed statement.

The airline said that after a review of closed-circuit television footage it determined that: "Ms. Warsaw was dropped off in the terminal at 12:30 a.m. CT on Dec. 1, and a family member arrived at the airport to pick her up at 1:13 a.m. CT."

Coltea did not respond to several requests for comment.

According to the airline's timeline, Warsaw was escorted to a wheelchair waiting area on the airport's upper level. Once there, video footage shows Warsaw twice using a walker to go outside to smoke a cigarette before being met by a woman.

The woman pushes Warsaw toward the door, then stops to take a cellphone picture of her sitting in the wheelchair. The woman walks away and returns two minutes later.

The video shows she flagged down a police officer, with whom she spoke briefly. The woman then wheeled Warsaw to a waiting SUV, where a man is waiting, and the group left the airport.

Earlier Monday, prior to the investigation, airline officials had apologized and said they had refunded Warsaw's ticket.

Do you think the family will now refund the airline?