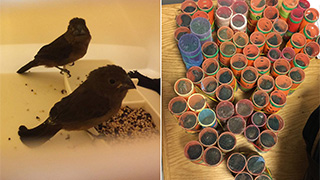 It’s enough to curl your hair.

The U.S. Customs and Border Protection said an agriculture specialist discovered the birds in the bag of a traveller who had just touched down in New York from Georgetown, Guyana.

The dozens of tiny finches were hidden inside the hair rollers in a black duffel bag, the law enforcement agency said.

The birds were confiscated from the unidentified passenger, quarantined and transferred to the Department of Agriculture Veterinary Services.

"CBP agriculture specialists are the first line of defence to prevent the introduction of animal diseases that have the potential to cause significant damage to the nation’s agricultural economy," said Troy Miller, director of  the New York field office.

Few other details were released, but we at Open Jaw have questions: