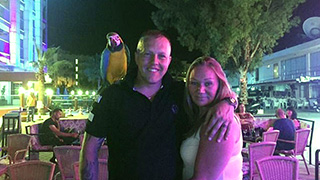 Thanks a lot Polly!

A UK couple posed for holiday snaps with a parrot, despite claiming to Jet2holidays that they were suffering from explosive diarrhoea at the time due to food poisoning. The photo was just one of many pieces of evidence proving that the couple are pieces of…um, fraudsters is what we’re trying to say.

The pair were recently convicted of conspiracy to commit fraud and ordered to pay Jet2holidays almost over $50,000 after making the bogus claim.

A Manchester court ruled that Martin and Lindsey Brown – aged 38 and 35 respectively – submitted a false claim against the operator for gastric illness.

After staying at the Emre Hotel in Marmaris, Turkey, in 2016, they fabricated a story about their illness to try to win up to $34,000 in compensation, including legal costs.

They claimed they had suffered with stomach cramps, diarrhoea, vomiting and nausea as a result of food poisoning contracted while on an all-inclusive 10-night holiday. Martin Brown claimed he had soiled himself in bed, and his children had soiled themselves at the pool, as a result of their sickness. The couple claimed this was caused by negligence, and resulted in them being bed-ridden and prescribed medication after a visit to the hotel doctor.

But don’t feel too sorry for them. An investigation by Jet2holidays, the hotel, and law firm Horwich Farrelly uncovered evidence showing that the claims were both fake and pre-meditated.

Evidence included video of Martin Brown dancing by the pool, despite being allegedly bedridden with nausea, diarrhoea and vomiting, and footage of the couple walking out of the hotel with their two children on the days they claimed to be laid up in bed.

A social media post from a guest at the same hotel said Martin Brown was in a bar until ‘daft o clock’, and Facebook posts showed the Browns enjoying an evening out despite their alleged illness, including posing for pictures with a parrot.

Another fellow vacationer said Martin Brown had bragged about how he planned to fabricate a false sickness claim to win compensation, and how he had done it before.

His Honour Judge Sephton QC convicted the Browns of conspiracy to commit fraud, and said: “They sought to benefit by their wrong-doing in a thoroughly dishonest fashion. Dishonest claims are a scourge which are blighting these courts.”