Stupid Is As Stupid Does: Parent Helps Child Vandalize An Aircraft 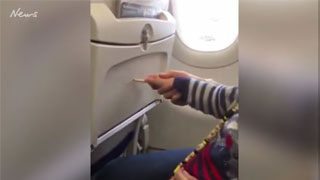 People often complain about the behaviour of children on airplanes. But you sometimes wonder whether the problem lies with the kids or the parents.

On the popular Passenger Shaming Instagram account, someone posted a video they took of a child writing all over the back of an airline tray table – and mom giving a helping hand.

The short clip shows a young child seated on an adult’s lap scribbling on the table.

The child, whose face is completely blurred out, appears to have vandalized other seats in the same row, with the video revealing others with similar childish markings.

At one point, the child removes the pencil from the tray — only for the adult to grab their hand and direct it back to the table.

The Instagram account, which posted the video with the caption: “Not only are tray tables for changing sh*tty diapers on, now you can help your kids draw all over them! It’s only a $100M aircraft. NBD (no big deal). #parentingfail,” has received an outpouring of outraged comments.

The act was variously described as “disrespectful,” “rude” and “disgusting” by social media users.

Instagram user @sarahpulvere wrote: “I would never allow my kids to do that because it’s disrespectful & rude. Pencils are for paper in my house, not walls or seats or floors or anything else. I’m disgusted by this.”

“I would’ve said something to the adult if I’d seen this … on sheer principle. Disgusting,” @vari_gia wrote, while @seemeslimjen added: “Pretty much all of the obnoxious behaviours of crappy passengers on this account are infuriating for one reason: they show how *entitled* some people are.”

Others insisted the airline should charge the family a hefty clean-up fee to cover the cost of removing the multi-coloured marks from the drop-down tray.