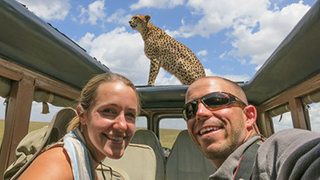 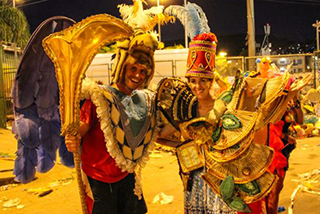 They have now been on their honeymoon, or “HoneyTrek” as they call it, for more than 2,500 days. They have been to seven continents and 53 countries.

“When we were planning our honeymoon, we realized how many places we wanted to explore, all the experiences we hoped to have in our lives, and that a 10-day trip just wasn't going to cut it,” Mike Howard says. “Life is short, the world is big, and the value of travel is too great to wait until retirement.”

They earn their living by blogging about their adventures on HoneyTrek.com. They have also just published a National Geographic book on couples adventure travel, Ultimate Journeys for Two.

When they embarked on their journey, they hit the highlights first: Machu Picchu in Peru, the Great Barrier Reef in Australia, a safari in the Serengeti.

After ticking off their bucket list items over six months, they decided to explore more obscure places. At the moment, they are housesitting for two months on the island of Roatan in Honduras.

“By not staying on the hotel strip, having actual neighbours, shopping in local markets and making Honduran friends, we’re truly experiencing this destination,” Howard says.

The Howards say it’s possible to travel without having a trust fund. They saved and planned for a year before they left. They budgeted for 16 months of travel at $40 per person per day.

They’ve stayed in five-star hotels and zero-star hovels. One time, while hitchhiking from Mozambique to Tanzania, their driver said he would only take them as far as his cousin’s village. They stayed in the cousin’s hut, crammed together on a thatch cot with mice scurrying around.

“It sounds horrible, and it was, but to this day we have some of our best belly laughs about that night,” Howard says.

“We’ve owned a home, worked the 9-to-5, and started a 401(k),” Howard says. “But it took this trip around the world to realize there are so many more ways to find success and happiness. Every day we travel, we learn something new, create a memory or make a friend.”