New Cookbook Will Help You Make Airline Food At Home! 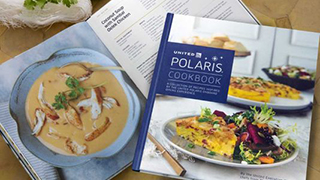 United is publishing a book of recipes ‘inspired by’ some of the meals served in its Polaris International Business Class. National Public Radio host Scott Simon opined that an airline food cookbook sounds just about as promising as an album of great moments from public radio fundraisers.

According to the United Airlines shop, the $29.99 cookbook features over 40 recipes from United's executive chefs and chefs from The Trotter Project, which works to aid young chefs in the culinary and hospitality fields.

There’s evidence that our taste buds don’t work quite as well at 38,000 feet, so there’s every chance that the recipes in the book will taste just great at home. A photo of the book shows a recipe titled “Coconut Soup with Sambal Oelek Chicken.” Yum.

“Make your guests stand in separate boarding lines in the hallway for half an hour before they can sit down. Make them sit in small, confining seats with their knees up to their chin and tell them, well, if they want more room, they'll just have to pay for it. Put their seats next to the bathroom and have a line of other guests open and close the accordion door all night. Bon appetit.”