The First Nudist Restaurant In Paris Is Closing Its Doors 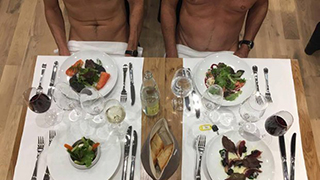 Could it be that not that many people want to go to a restaurant, take off their clothes and sit down on a cold chair to eat hot food in the presence of other naked diners?

It seems that way, at least in Paris, where restaurant O’naturel will close next month after 15 months of serving diners in their birthday suits.

France 24 reports that the restaurant is shutting its doors for the most common of reasons -- because it failed to attract enough customers.

A post on the restaurant’s Facebook page read: “It is with great regret that we are announcing the final closure of the restaurant O’naturel February 16, 2019.”

After hosting a private dinner for the Paris Naturist Association, 42-year-old twins Mike and Stephane Saada – who are not nudists themselves – decided to open a nude restaurant in 2017. As with anything featuring human nudity, the idea got lots of attention, but perhaps the market for dining ‘a la buff’ on French favourites like escargot and foie gras was not as large as expected.

At the time, Stephane claimed that naturist beaches and other tourist resorts only offered people the opportunity to “be nudists in the summer.” She wanted to offer a year-round opportunity.

On a Facebook post announcing the closing, the owners wrote: “We will only remember the good times, meeting beautiful people and customers who were delighted to share exceptional moments.”