Ice Believed To Be From Plane Falls Through Roof Near YYZ 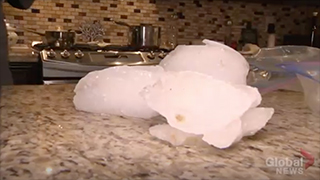 This piece of the ice chunk weighed five pounds on its own.

A Mississauga, ON man says he and his family are lucky to be safe after a large chunk of ice, believed to have fallen from an airplane, crashed through the roof of his home, landing steps away from his bed.

Tony Caccavo told Global News that his wife heard a loud bang at around 6:30 a.m. on Wednesday and saw the damage inside the closet of their bedroom.

He said she called him and he returned to their home, located about 20 kilometres south of YYZ, to see what happened.

“At first I thought that I had a leak in the roof and then it built up the ice, and then it fell off,” Caccavo said. “But when I came home after my wife called, I saw the hole and I said, ‘No way, that must have come from the air.’”

He said the force of the impact threw a few of the ice chunks under the bed several feet away.

Caccavo said they are waiting for answers from officials about what happened. Caccavo said his insurance company has agreed to cover most of the damage.

A spokesperson for the Transportation Safety Board of Canada, the agency responsible for investigating major incidents involving all major modes of transportation, told Global News that as of Wednesday evening, officials weren’t investigating.

When asked about the damage, aviation expert Jock Williams said it’s highly likely the ice came from an airplane.

“It takes a mile of falling to get the kind of velocity that you’d need to penetrate a roof,” he told Global News. “A five-pound object dropping from 10,000 feet – or 20,000, or whatever — will go through any house or roof you want to put up.”

Williams said ice buildup on planes doesn’t form in boulders like the ones shown by Caccavo, but rather in thin sheets. He speculated on a couple of causes for the ice falling.

“Maybe when they cycled the gear down to land, then a hunk of the ice was knocked free,” he said, adding there may have been a leak point in the landing gear well.

The other theory was that uncontaminated liquid pumped into the lavatory system by personnel on the ground may have built up just inside the compartment door and came free during the flight.