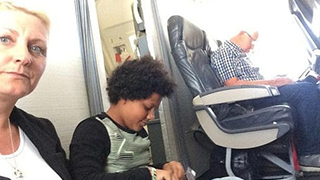 Paula Taylor and her daughter Brooke on the floor of a TUI Airlines plane. Credit: Paula Taylor 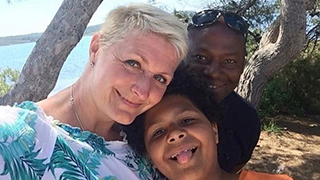 A family were forced to sit on the floor of an airplane during their TUI Airlines flight home from Menorca last summer after being told that their allocated seats did not exist.

Paula Taylor, 44, her husband Ian, 55, and their daughter Brooke, 10, from Alcester, Warwickshire, arrived early at MAH in June last year for their flight.

"We made sure we were three hours early at the airport to check in early just to make sure we got seats together," Paula Taylor explained to a BBC One TV show called Rip-Off Britain: Holidays.

They were given the seat numbers 41 D, E and F, but when they boarded the plane they could not find their seats. Probably because there weren’t that many rows.

"We all just looked at each other as if to say 'where's our seats gone?'. There are no seats where our seats should be," Paula Taylor said.

Members of the cabin crew proposed that 10-year-old Brooke could take the last spare seat on the flight, and Paula and her husband Ian could sit in two spare the jump seats meant for the crew.

However, after the plane had taken off, the couple were told that they had to vacate their seats as the attendants needed access to the food and duty free items, which were stored behind them.

On the floor they were joined by their daughter and later the co-pilot of the aircraft, who thanked the family for their "cooperation and understanding."

"He said that how calm we were and he was so grateful because he would have missed the time slot to take off," Paula Taylor said.

She said of the floor: "It's hard and it's uncomfortable and it's just filthy. It's just not an experience I ever want to repeat."

The UK Civil Aviation Authority, the body that regulates airlines in the UK, is now investigating the incident. It has asked TUI to explain why the family was allowed to sit on the floor and is looking into a possible breach of regulations. Pax are allowed to sit in crew seats under certain conditions, but must not be left unseated during any stage of the flight.

After being contacted by the program, TUI offered the family a full £1300 refund, blaming the incident  on a "last minute aircraft change."

Taylor says that she "got short shrift" from the airline when she personally complained immediately after the incident, despite having photographs of what had happened.

She alleges that, after explaining to the company that the seats were "physically missing," she was told that there was no record of the incident and offered a "good will gesture" of £30. Frustrated, that’s when she contacted Rip-Off Britain.

A spokesman for TUI said: "We are sorry to hear about Mr. Taylor and his family’s experience with us.

"Unfortunately a last-minute aircraft change meant that the seats the family was originally assigned were unavailable as the alternative aircraft had a different seating configuration. We're also sorry for the way the situation was initially handled and we’ll be investigating this."