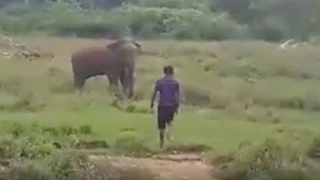 A man's attempt to allegedly hypnotize a wild elephant in Yala National Park in Sri Lanka went terribly wrong and resulted in him being stomped and trampled to death.

A witness recorded the incident and controversially posted it to YouTube. The man stopped his vehicle, got out and approached the elephant, apparently telling people he had the ability to hypnotize the huge – and provoked -- animal.

Onlookers, including children, can be heard yelling and crying as the man is trampled by the solo elephant, believed to be male. The entire interaction takes just a few seconds.

Yala, bordering the Indian Ocean, aims at the tourism mass market, with hundreds of safari trucks allowed in each day. Visitors are prohibited from leaving their vehicles while touring the park and officials warn tourists to observe the animals without otherwise interacting with them.
Questions are being asked about how such a reckless act could have taken place.