Toto Song ‘Africa’ To Play For ‘Eternity’ In Namibian Desert 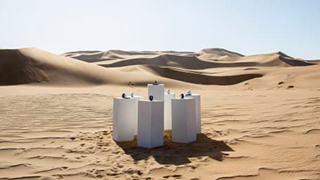 To this listener, Toto's 1982 hit song "Africa" already went on forever, but now that’s a reality, thanks to an installation by an artist who plans to play the song on loop in a Namibian desert -- for eternity.

German-Namibian artist Max Siedentopf has set up the sound installation called "Toto Forever," in an undisclosed location in the 1,900 kilometre-long Namib Desert.

The desert, on the west coast of Southern Africa, is around 55 million years old -- making it the world's oldest desert and the "perfect spot" for his work, Siedentopf, 27, told CNN in an email. "Hopefully the song will play just as long," he added.

Siedentopf is using solar batteries to power the entire installation, which consists of plinths supporting six speakers attached to a single MP3 player that contains one track: Toto's "Africa."

The song has been a pop-culture phenomenon since its release in 1982, topping the U.S. Billboard chart and selling more than four million copies in the US alone.

In recent years, rock band Weezer made a cover of it; a sample of the song is featured in the movie Aquaman; it has a dedicated Twitter bot, which has been spitting out lyrics every couple of hours since 2016; and its melody, "I bless the rains down in Africa," is frequently belted out by revelers at parties and weddings across the world.

"Even though 'Africa' by Toto was released 1982 it is still very much present in today's pop culture and frequently used for memes and even entire Reddit pages are dedicated to the song," Siedentopf, who is based in London, said.

"I was very intrigued by this and wanted to pay the song the ultimate homage and physically exhibit 'Africa' in Africa."

The song -- written by Toto's late drummer, Jeff Porcaro, and keyboard player David Paich -- has occasionally been mocked for its lack of local knowledge: One of the lyrics claims "Kilimanjaro rises like Olympus above the Serengeti," but Africa's highest peak can't be seen from the Serengeti.

When asked whether his work was making fun of the tendency of non-Africans to exoticize the continent, Siedentopf said there was a lot to say about Western stereotypes, but "putting (that) aside, the installation is supposed to look more at the lighter side of things and everyone should be able to enjoy it."

He said he won't reveal the exact location of the work, adding that it is "like a treasure that only the most loyal of Toto fans can find."