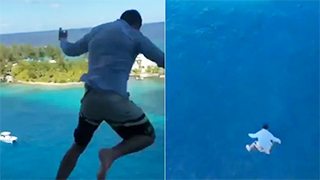 And the idiot of the week award goes to...

A 27-year-old man from Vancouver, WA, jumped from the 11th deck of a Royal Caribbean cruise ship while it was docked in Nassau, Bahamas, for no other reason than it seemed like a good idea at the time.

The jumper, Nick Naydev, posted the video of him leaping off the deck of Royal Caribbean’s Symphony of the Seas to his Instagram account with the caption, “Full send.” The comment section was flooded with everything from scorn to applause.

The video shows Naydev climbing onto the railing of a cabin balcony as his friends laugh in the background and then leaping into the water more than 30 metres below.

He said he got the idea for his venture upon waking up that morning, and with the encouragement of his friends, took the plunge.

Naydev said he was recovered from the water by a small boat that happened to be in the area and brought to shore, where security officials from the ship told him that he and his friends were being kicked off and would have to find their own way home from the Bahamas.

Naydev and his friends have been banned for life from the cruise line and may face legal consequences.

"This was stupid and reckless behaviour, and he and his companions have been banned from ever sailing with us again," Royal Caribbean said in a statement sent to USA Today. "We are exploring legal action."

More than a dozen cruise passengers die each year jumping or falling from cruise ships. Just last week, a 16-year-old boy slipped and fell to his death while attempting to climb from balcony to balcony on a Royal Caribbean cruise ship.