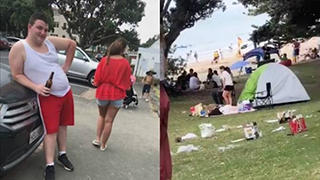 A British tourist family has cut a swathe of ugliness across New Zealand, and been described in the media by terms including “leeches,” “trash” and “worse than pigs.”

The family of 10 to 15 people has become Internet infamous with reports of their unruly behaviour prompting the normally easygoing Kiwis to deport the obnoxious group on the grounds of "matters relating to character.”

Since DEC 2018, the group has been accused of littering, assault, dine-and-dash, disorderly conduct and petty theft. They allegedly treated store and restaurant employees terribly and were very rude to locals.

According to one report, the family refused to pay for meals on at least four separate occasions, routinely claiming they found hair or bugs in their food or drink – after finishing the entire meal.

One local restaurateur said the tourists refused to pay for five meals totalling CAD$250 and allegedly put ants into their own food. When confronted by other guests, the group became aggressive.

A particularly infamous photo shows the family leaving an absolute dump in their wake following a visit to Takapuna Beach and, again, when a woman asked them to clean the discarded boxes, beer bottles, and baby wipes, they responded by threatening violence.

Since being issued the deportation notice last Tuesday, they have 28 days to leave the country. According to several reports, a member of the family told the New Zealand Herald they have decided to cut short their holiday by one week.

"We have to go home early because the New Zealand people are treating my family like s--t," one of the family members told the New Zealand Herald. "We paid a lot of money to come here for a family holiday."

The debacle has gained so much international attention that a Trade Me auction for a Bunnings hat reportedly worn by one of the family members has reached CAD$900.