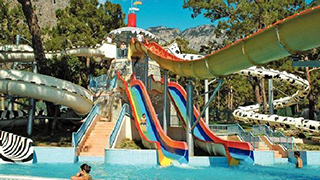 Thomas Cook is facing legal action from a woman who claims she was 'almost crushed to death' when an obese woman landed on her on a hotel waterslide.

Jemma Joslyn, 32, is taking action against the operator claiming there were no safety precautions in place at the hotel to monitor who was coming down the slide.

In response, Thomas Cook issued a short statement saying: "Both our UK-based welfare team and our in-resort team have been in touch with Ms Joslyn on several occasions following this accident. We also arranged for her parents to fly to Turkey to be with their daughter."

A spokeswoman said a duty office arranged flights for the parents free of charge, plus transfers and for them to stay at the hotel where the children were staying.

She said she could not comment further as the case is with the legal team.

According to a report in the Daily Record, Jemma Joslyn was only 14 hours into her holidays at the Liberty Hotels Lykia in Olu Deniz, Turkey, when the incident happened.

She said she had just come down the slide when a women crashed into her, feet first, and was travelling “around 30 miles (50 km) per hour.”

Joslyn, from Seaford in East Sussex, was rushed to the hospital with internal bleeding, liver and kidney damage, fluid on the right lung and five cracked ribs. She claims she had to spend $8,700 on 'lifesaving' surgery, which a friend helped pay for.

She also alleges that hotel staff did not check on who was looking after her children while she spent eight days in hospital, three of them in an intensive care unit.

"If it was left up to Thomas Cook I would be dead and my children would be in the Turkish care system somewhere," she told the newspaper. Joslyn says she still hasn't been able to return to work.

Magdalena Knez, travel litigation solicitor from Slater and Gordon, who is representing the case, said: "My client could have spent her life needing serious medical attention due to the fact that the swimming pool slide was not operated with the appropriate safety measures.

"At this point we are still unclear as to the extent of her injuries and the long term effect this will have on her health.

While it’s always unfortunate when someone gets injured on vacation, it’s hard to see how the tour operator would be at fault, or somehow expected to monitor waterslide activity. And their response seems pretty substantial.

Open Jaw has a golden rule when using resort waterslides: when you come off the end of that slide and hit the water, your next thought should always be about getting the hell away from the bottom of the slide.