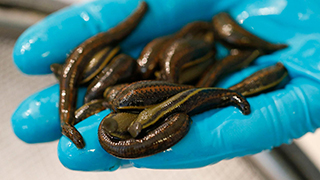 Step aside, man with four kittens stuffed in your pants.  Move along, woman with 24 gerbils hidden under your skirt. You've both been pushed off the podium for providing the weirdest airport story we’ve heard this month. And it’s still January!

Even, better, we Canadians get to take that dubious honour home, after a Canadian man returning from a trip to Russia was found to be carrying 5,000 live leeches in his luggage on arrival at Toronto’s Pearson International Airport.

A beagle working as a sniffer dog for the Canada Border Services Agency made the discovery at Toronto Pearson International Airport on 17OCT, 2018, National Geographic reports.

Because the man, who has not been named publicly, wasn't actively trying to conceal the parasitic critters, he's not being charged with smuggling. Rather, he's charged with illegally importing an internationally regulated species without obtaining the proper permits, according to Andre Lupert, manager of intelligence for the Wildlife Enforcement Directorate at Environment and Climate Change Canada for the Ontario Region.

Lupert told National Geographic that the "illegal leech importer" will face a court hearing next month in Toronto.

Leeches have been used by healers and doctors for over 2,000 years to treat ailments believed to be caused by an excess of blood.

Over the last two decades, hirudotherapy, or leech therapy, has come back into favour within the medical community. South of the border in 2004, the Food and Drug Administration approved the use of leeches for certain surgical applications, including trauma and reconstructive procedures.