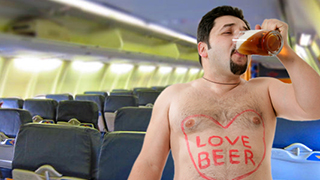 Not the real drunk. Just another drunk on a plane.

The gas price at the pumps has been a nice surprise for Canadians of late. But a British man whose drunken antics forced a 4JAN WestJet plane from Calgary to London to divert is facing a big gas bill --  he has been ordered to pay $21,260.68 to the airline.

"Mr. Young was sentenced to one additional day of jail on each count, considering the seven days he spent in pretrial custody..." prosecutor Lori Ibus told USA TODAY. "He was also ordered to pay WestJet $21,260.68 in restitution as part of his sentence. This amount represents the cost to WestJet for the fuel costs relating to the having to return to Calgary International Airport."

It was revealed in court that Young, who has battled alcoholism, drank approximately six alcoholic beverages prior to boarding the London-bound WestJet flight.

Young repeatedly tried making his way to the bathroom, even when it wasn't safe to move around, "right after take-off," a court document reveals.

"Initially, the accused begrudgingly returned to his seat but again got up shortly afterwards and again tried to push his way into the locked lavatories," according to the document. He became aggressive with both flight attendants and another passenger. Because flight attendants and the passenger "were left shaken and threatened by the accused's behaviour -- being verbally aggressive, swearing, shouting, fists clenched -- the flight crew chose to divert the flight.

To land safely, the captain needed to dump about "20,000 pounds of fuel," per the court document.

Young apologized in written statement, saying he was sorry for "damage and inconvenience" he caused his fellow passengers.

WestJet's losses in both fuel and passenger payments could reach more than $200,000, which WS can seek from Young through a civil case.