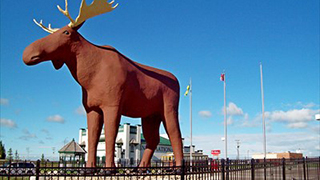 The battle of the moose. 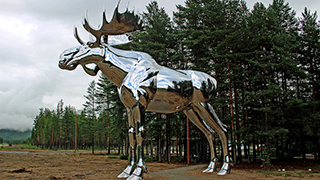 Canada and Norway are used to battling it out on a hockey rink, but this time competition between the two countries is taking a different form: the battle for the biggest moose.

The rivalry started about a month ago when it was revealed that the town of Stor-Elvdal, Norway had a silvery moose sculpture that was taller than Moose Jaw, SK’s by 30cm, which sparked an ongoing battle over the world’s tallest moose sculpture.

Now, Stor-Elvdal’s deputy mayor Linda Otnes Henriksen, after following efforts by people in Moose Jaw to raise funds to boost the height of the community’s beloved Mac the Moose, says she may be coming to Saskatchewan to discuss a possible truce.

Otnes Henriksen says Stor-Elvdal doesn’t have the kind of money to keep building bigger sculptures to compete with Moose Jaw and suggests a possible compromise may be raising Mac’s height to be equal to the Norwegian moose, which was created as part of a road safety campaign to remind drivers to be vigilant of animals on roadways.

However, Moose Jaw Mayor Fraser Tolmie has said that while he’s open to conversations about twinning the communities and building relations over the sculptures, his plans still involve making the 9,000-kilogram Mac taller.

The people of Canada, he says, want to have the bigger moose!

The project has received a CAD$25,000 donation from Moosehead Breweries and a GoFundMe campaign has also been launched with the goal of raising CAD$50,000.

Some ideas proposed for raising the statue’s height include bigger antlers, although adding an RCMP Stetson hat or stilettos have also been proposed.