Delta’s Foray Into The Matchmaking Business A Fail 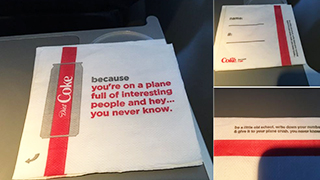 That’s what one Twitter user posted about Delta Air Lines’ and Coca-Cola Co.’s napkins that suggested plane passengers hit on one another during flights.

“Because you’re on a plane full of interesting people and hey... you never know,” was imprinted on the napkin.

The napkins went on to say, “be a little old school. Write down your number & give it to your plane crush,” with a line to write your name and phone number on the reverse.

The two companies issued statements saying they were already working to remove the napkins from flights, writes Huffington Post.

“We sincerely apologize to anyone we may have offended. We worked with our partners at Delta to begin removing the napkins last month and are replacing them with other designs,” a spokesperson for Coca-Cola said in a statement.

Delta also apologized for the blunder.

In a statement, the airline wrote: “We rotate Coke products regularly as part of our brand partnership, but missed the mark with this one. We are sorry for that and began removing the napkins from our aircraft in January.”