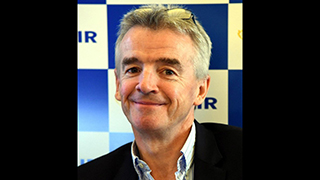 Jim Atkinson, a captain with Ryanair from 2006 to 2014, didn’t hold back with his opinions on the airline on a UK television show. He says Ryanair – led by CEO Michael O’Leary, “detests” its staff.

“That’s how they look at you. If they could replace pilots with a computer and replace cabin crew with a vending machine, you know when you’re working there they would do that,” he continued.

In the program, CEO Michael O'Leary is reported to have once describe pilots as “no more than glorified taxi drivers.”

Matt Cooper, author of Michael O'Leary: Turbulent Times for the Man Who Made Ryanair, also appeared on the show, slamming the airline boss for the treatment of his staff.

“He regards employees almost like a liability to an extent, they’re something that has to be paid for. He has a particular dislike for pilots, and going back to the early days of Ryanair he regards them as rather arrogant and self-serving,” Cooper said.

In 2017, hundreds of thousands of passengers had their travel plans wrecked after Ryanair admitted it had "messed up" the planning of its pilots' holidays. The airline was forced to cancel 20,000 flights.