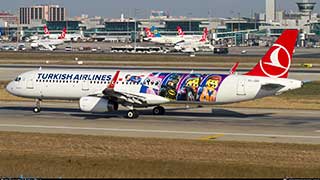 Unless it's someone's first time on a plane, they're probably only half-listening during the flight attendant's onboard safety demonstration. Especially if you're a frequent flyer, you're probably zoning out before they say "Welcome."

It's a mandatory part of flying but, as one airline is showing, it doesn't have to be a mundane one.

HMG Aerospace Limited is reporting that Turkish Airlines has revamped its in-flight safety demonstration with its second safety video featuring LEGO characters, which will be shown on all flights starting 1MAR.

The four-and-a-half minute video features Emmet, Lucy and others from the cast of The LEGO Movie 2, including Batman himself at the helm.

Alongside the LEGO characters, the safety video also features some of TK's most recognizable destinations, journeying through iconic cities across five continents and ending at the airline's new home at IST.

Creating the video involved more than 400 people in five different countries – Turkey, the U.S., the U.K, Canada and Australia -- working 900 hours over a span of four months. The video also used 24,000 LEGO minifigures and a whopping 20,330,795 LEGO bricks to build all the locations in the new video – 10 times the amount used in the first LEGO Movie-themed safety video, which debuted last AUG.

The LEGO franchise theme is also visible off-screen on a specially wrapped narrow body Airbus A321-231, currently flying across Europe.