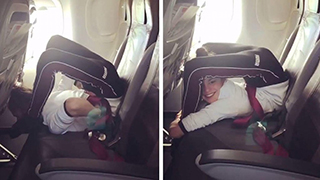 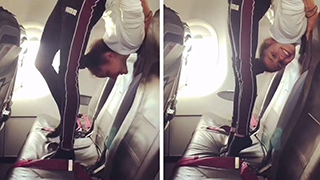 A ridiculously flexible gymnast has Instagram abuzz after sharing a now-viral video of herself to the social media platform, contorting her body into unbelievable positions — within the tight confines of an airplane seat.

In the much buzzed-about clip, which has since been viewed over 238,000 times on PassengerShaming’s account – and even more on Millinger’s own Instagram page – the Austrian native stands on the airplane seat in an extreme backbend, before lowering her head to rest on the seat itself. She then proceeds to buckle the standard seatbelt around her body – safety first -- grabs her ankles from the front, and finally gives the camera a cheeky smile.

“Why does this make me want to vomit?” another agreed.

“Were there jugglers, clowns and lions as well?” one mocked.

“I'll bet the air hostesses love this sort of behaviour,” another chimed in.

For our part, we’re just happy when we’re able to fold ourselves into a seat, and then get out again at the end of the flight.