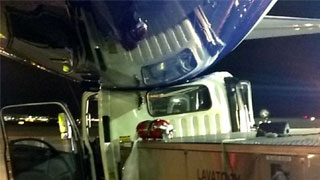 A JetBlue flight heading from New York to Denver was delayed last month after a truck carrying toilet waste crashed into the aircraft and became wedged underneath the fuselage.

The incident occurred at JFK’s Terminal 5. Passengers had to get off the plane until the ‘honey wagon’ could be carefully dislodged from underneath.

Neither the male driver of the vehicle nor anyone on board the aircraft were injured, and thankfully the contents of the truck remained safely contained.

It’s unclear what caused the collision to occur. JetBlue released the following statement: "On January 12, while flight 97 from New York-JFK to Denver was boarding, a lavatory truck made contact with the aircraft. No customer injuries were reported and the flight was switched to a different aircraft."