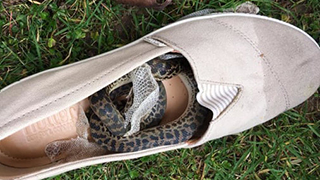 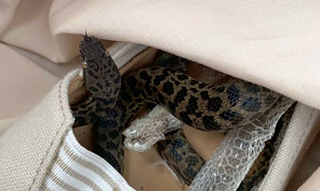 A Scottish woman who returned from Australia on a 14,500 km flight was shocked to discover a live spotted python in her suitcase when she unpacked at home.

The small (but still terrifying) serpent had taken up residence in her shoe, and had even started shedding its skin during the lengthy journey.

"I responded to a call from a woman who had just returned from a holiday in Australia who had found a small snake inside her shoe in her suitcase," animal rescue officer Taylor Johnstone said in a statement sent to CNN.

"When I arrived, the snake had been contained by the caller, so I safely removed the snake from the property. Upon examination, the snake was found to be a spotted python which is not venomous," Johnstone said.

"The snake is now in quarantine at our animal rescue and re-homing centre in Edinburgh."