Canada: The Perfect Destination For Wallflowers 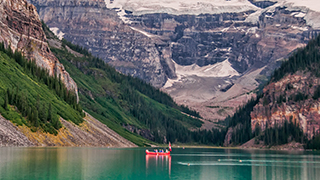 Canadians may be a social, rowdy bunch when it comes to discussing hockey scores, but our geography actually lends itself to rank as an ultimate introvert-friendly holiday destination.

"With its picturesque skylines and serene landscapes, Canada has something for us all," says the report created by comparethemarket.com which ranks the introvert appeal of various countries. "And with its population of 37 million, Canada's vast area means there's technically only four people per square kilometre - allowing you to have the choice to explore the metropolis of Toronto or the beautiful Jasper National Park on your own."

While the Rockies certainly inspire feelings of solitude and isolation, how well Toronto fits that bill is highly debatable.

Although it's considered significantly less dense than other major cities around the world, Toronto itself still has a population density of 4,457 people per square kilometre, according to a Global News article published just a year ago.

Russia took the number one spot for the most introvert-friendly holiday destination, just ahead of Canada at number two. As the world's largest country, the report says introverts can enjoy its historic cities and serene countryside as there are only nine people per square kilometre.

Often characterized as a haven for introverts, Scandinavia is the best region overall, with three countries appearing in the top 10: Finland, Norway and Iceland.

Other introvert-appealing countries that made the list were Argentina, Australia, New Zealand, Bolivia and Namibia.