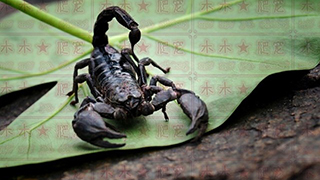 One of the good things about Canada is that we don’t have a lot of terrifying insects or venomous snakes. So when you board a flight from Toronto to Calgary, being attacked by a 10-cm long scorpion is not likely to be a top-of-mind concern.

But that’s exactly what happened to a woman on an Air Transat YYZ-YYC flight on 26FEB.

CBC News reports that Quin Maltais is from Yukon and studying in Alberta. She was in the last hour of a four-hour flight when she started to feel a fluttering sensation on her lower back.

"I just kind of ignored it," she said, thinking the air conditioning on the plane was blowing down her back. "As soon as the lights turned off again, closer to when we're literally about to land, I felt the piercing pain on my lower back, like, oh, my God, something bit me."

She said she couldn't take her seatbelt off to see what it was as the plane was landing. "The lights turned on, I looked into the ball of bundled sweater that I had but nothing was there. I looked behind me on the seat and then I saw movement and there was a scorpion that was in the fold toward the back of the chair."

She said she ripped her seatbelt off and jumped onto her armrest and stared, having difficulty processing what she was seeing.

"There was a scorpion in my sweater. It was on my back for the past 30 minutes … it was like four inches [10.16 cm], maybe," she said, adding that she wondered "What is that doing on a Canadian flight."

Maltais asked a flight attendant to explain what was happening. She said the attendant initially went back to her seat and found a gum wrapper, trying to tell her that's what had stung her. But Maltais asked her to check again and she then spotted the scorpion between the seats.

Paramedics escorted Maltais off the plane. EMS confirmed they responded to the airport at 10:30 p.m. and assessed Maltais, and she wasn't hurt. Not physically, anyway.

"I had a full-fledged panic attack … paramedics had to kind of keep me strapped to a heart monitor for a while cause I was just unable to calm down," she said.

As for the scorpion, the airline confirmed it was captured once all passengers had disembarked from the plane and handed over to airport authorities. TS says it has no idea how the big scary bug got on the plane.

"Although this is an extremely rare situation, it can unfortunately occur. Our teams followed the protocols in place and a complete inspection of the aircraft, as well as an extermination process, were carried," said an Air Transat spokesperson in an emailed statement.

Hanna - March 12, 2019 @ 10:06
Hehehe littel bugger hitched a ride from Cancun and stayed on board.
I vote he pays the taxes plus the flight cost for the extended route.. at least he no longer requires a Visa to enter Canada - lol