At 10 years old, kids are usually climbing trees, skinning knees and running outside. But one 10-year-old visionary is too enamoured with air travel for such childish frivolities.

Alex Jacquot dreams of starting up his own airline and turned to Qantas CEO Alan Joyce asking for advice in a letter that the airline shared on Twitter.

The 10-year-old, who declares that he is already the CEO of an airline called "Oceania Express," urged Joyce to "please take me seriously."

"I have already started some stuff like what type of planes I'll need, flight numbers, catering and more," wrote Jacquot in the letter, which has since gone viral on social media.

Although the budding air travel entrepreneur says he has already made some significant strides in his business --Jacquot claims he has already hired a CFO and an IT head among other key roles – he was keen to get a few specific pieces of advice from Joyce while he's on school holidays and has time to work on his new airline.

Proving that he has the right mind for air travel, Jacuot said he is thinking about A350 planes for Sydney/Melbourne to London flights – as is Qantas -- but questions how people can get a decent sleep during a 25-hour journey.

Jacquot's aspirations struck a chord with Joyce, whose letter response said that he too "was once a young boy who was so curious about flight and all its possibilities."

Joyce then invited the entrepreneur for a personal meeting to compare notes and a tour of Qantas’ Operation Centre.

"Our competitors don't normally ask us for advice, but when an airline leader reached out, we couldn't ignore it," wrote Qantas in a cheeky Twitter post. 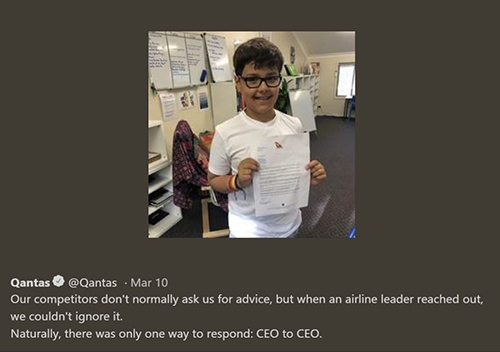