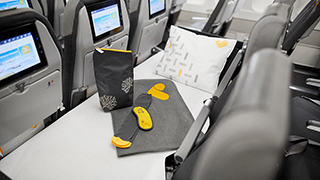 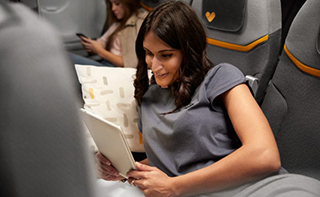 Travellers can now enjoy a lie-flat seat in economy class on select Thomas Cook Airlines long-haul routes. And the price is a pittance compared to biz class – just £200 on top of the price of a single economy class ticket.

The airline is launching ‘Sleeper Seats,’ which involve the transformation of a row of three Airbus A330 seats into a bed.

Once the seat belt signs have been turned off, a flight attendant will place a ‘comfy’ mattress across the three seats, a fitted sheet, pillow, blanket and amenity kit.

The new feature is available for flights between the UK and New York, San Francisco, Orlando and Cancun.

Website SecretFlying says the downside to the sleeper seats, which are available for adults and children aged 12 and over, is that they are only 148.4 cm long. So unless you are 4’9” tall, you will most certainly have to sleep curled up.

Henry Sunley, Commercial Director at Thomas Cook Airlines says the “Sleeper Seat is a fantastic way to transform your flying experience and enjoy some extra comfort when flying in Economy.”

He adds: “It’s flexible too, as while only one person can use Sleeper Seat at a time, you can swap with other people in your group during the flight…but it’s entirely up to you if you want to share!”

The Sleeper Seat will be available on selected flights from 13MAY 2019.

There’s sure to be demand for what an English friend dubbed ‘Butlins Business Class’ when Open Jaw described it to him. But they’ll have to move quickly -- there are only four available per flight, at the back of the plane.

It’s not the first economy lie-flat product on the market. Air New Zealand won awards for its Skycouch offering.